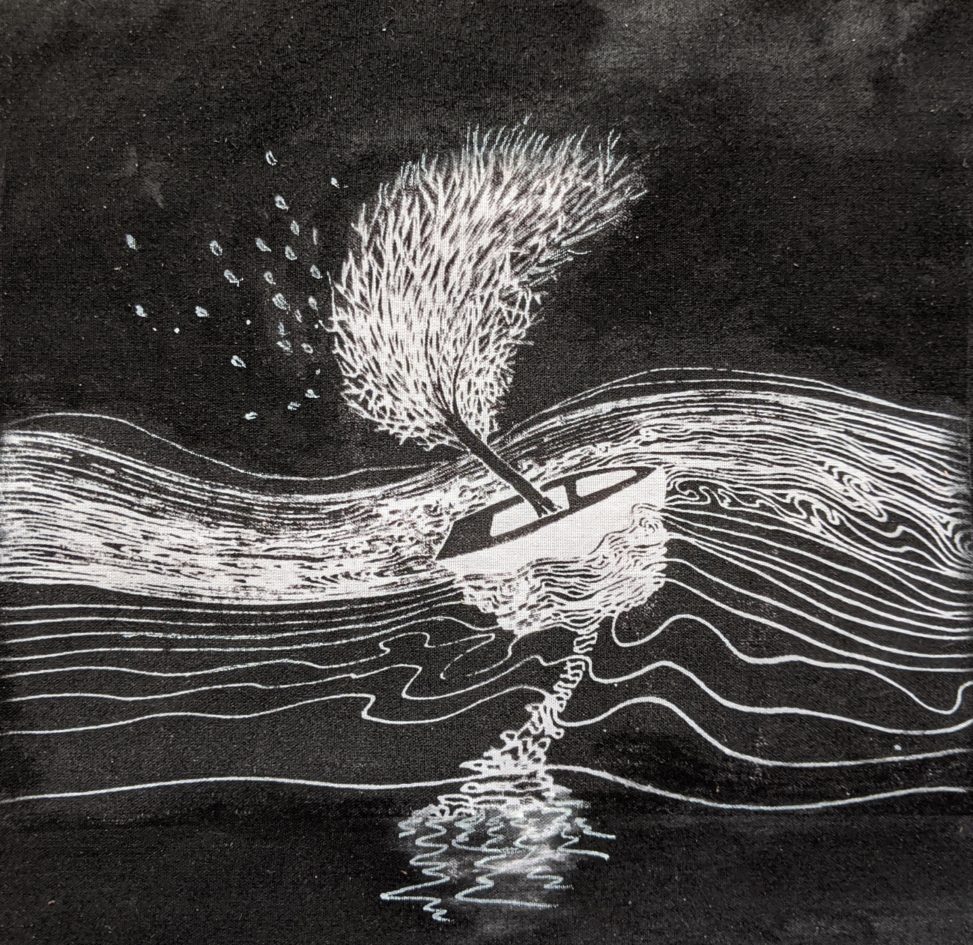 An Image of Hope

Our contribution to the quilt is called ‘Hope’ by Leicester-based artist George Sfougaras, who very kindly made a screen print of his image onto fabric so it could be used as a quilt block. George has previously allowed us to use his images in our Splot, Refugee Learning Stories, as the theme of his work (explained below) fits so well with our intentions for an interactive open space for learners and educators to share their experiences of learning. We created it because we are curious to find out how and why refugees and other displaced people are learning online.

One of the underlying aims of Refugee Learning Stories is to experiment with the idea of the ‘Third Space’ model as a way of describing inclusive practice in online and mobile education for refugees. The concept of the Third Space was originally popularised by postcolonial theorist Bhabha (1994), who described it as a ‘hybrid’ culture that emerges out of the intersection between two cultures, in which neither culture is dominant nor superior. Bhabha saw these cultures as the ‘colonised’ (the First Space) and the ‘coloniser’ (the Second Space), a conception which resonates with current debates around decolonising the curriculum, as it depicts an alternative kind of relationship between people on the margins of society and those at the centre – one that aims neither for superficial harmony nor for prejudiced confrontation, but rather for mutual understanding gained through dialogue.

At OER20, we will be running an open space session, in which we plan to explore the concept of the Third Space with participants working in different contexts. This session will create a space for participants to interact and engage with emerging issues that can help transform the culture of higher education, based on principles of openness, transparency, co-creation and care. We will focus particularly on the concept of ‘good hybridity’ (Bauhn & Fulya-Tepe, 2016), which provides intriguing possibilities for conceptualising ‘bridging’ work in open education.

George has described his process for making the print as follows:

“The print ‘Hope’ was inspired by the exodus of refugees and the images of people sailing across the Mediterranean from Turkey to the Greek islands. The news was and is saturated with shocking pictures of little boats and uprooted people, desperately seeking a better life, leaving all they had and all that sustained them behind.

Early on the day when the original idea was conceived, I was walking to my studio through Victoria Park in Leicester. The trees had shed their last autumnal leaves and stood in a bitter breeze that bent and swayed their thin branches. They stoically faced their circumstances in the hope of a new spring and new life. The image of the tree made me think of how hope survives and sustains us, even guides us, when we face insurmountable odds. I ran to the studio and made a simple little sketch so that I would not lose this moving image and idea.

The tree on the boat is a metaphor. The three components of the print, the boat, the tree and the sea are simple and universally understood, but their juxtaposition makes us look again and reflect. The tree symbolises a person who has been displaced or uprooted and through life-changing events, forced to become a refugee. Anyone in that position cannot survive long without putting roots down somewhere. When they do, will they survive and thrive, create a meaningful life for themselves and their children and bear fruit?”

More of George’s work can be seen at his website: www.georgesfougaras.com/