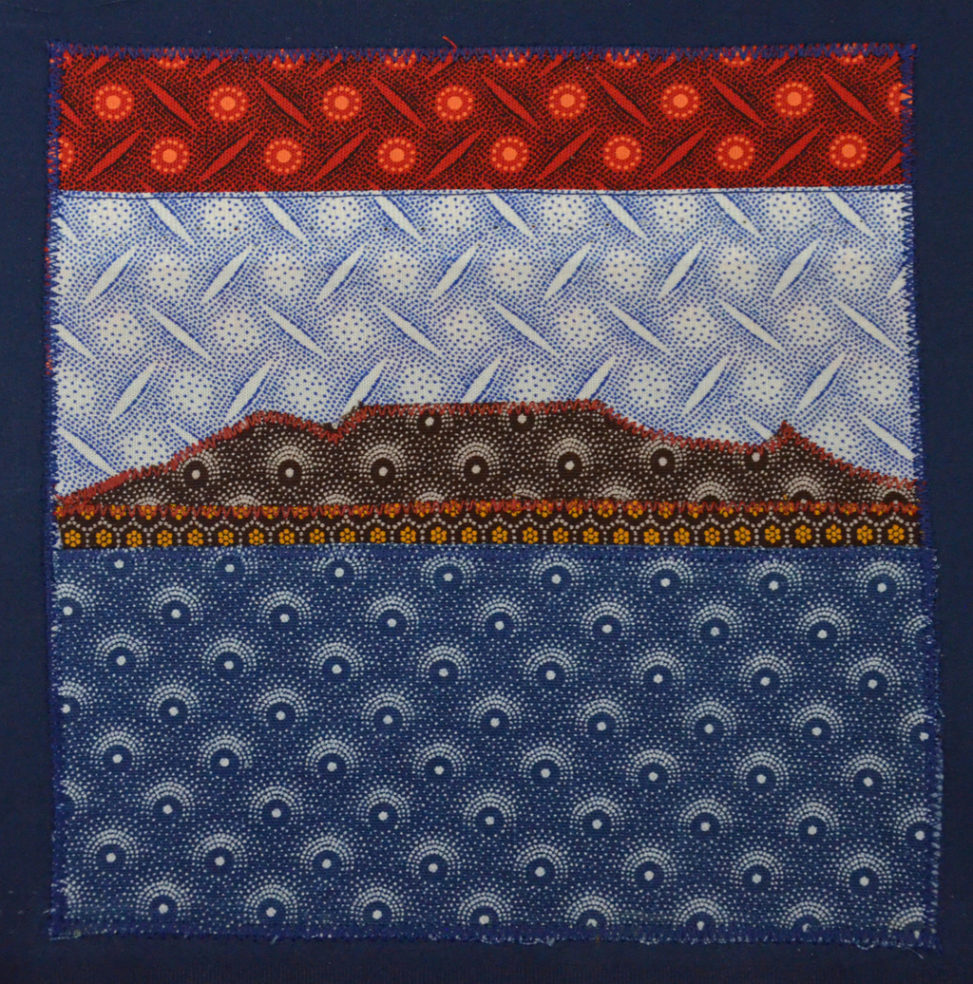 I have made a square using South African shweshwe, a fabric which originated elsewhere in the 19th century but has been embraced by African culture and is now proudly produced in South Africa where I was born and grew up. I’ve previously sewn and blogged about the fabric in my hobby blog. My square reflects the tensions between colonisation and indigenous culture, and how attitudes to social justice and cultures evolve over time.

This is made of 5 pieces of shweshwe fabric I bought in Mandi Textile and Design Shop, Observatory, Cape Town (Page, 2017a) when I was lucky enough to be there in March 2017 for the OEGlobal conference. So the fabric has an OER connection already. A subsequent blog post explains more about the history of shweshwe and its integration into African culture during the 19th century, when I used some of the fabric I bought in Cape Town to make some international themed doll outfits for a hobby event:

“The Xhosa [people] adopted the indigo patterned shweshwe fabric which was introduced to Southern Africa in the 19th century by German and Swiss missionaries and floral, striped, diamond, square and circular geometric African designs for the fabric have emerged. It is called shweshwe for Basotho King Moshoeshoe I, who adopted it in the 1840s. In Xhosa shweshwe is known as ujamani. Shweshwe is used to make dresses, skirts, wraparound clothes and aprons.” (Page, 2017b)

This shweshwe square is about the ever evolving culture in post-colonial South Africa, with the mountain of the mother city floating between the sea and sky, with the red symbolising both the glorious sunsets over the mountain as well as the always present undercurrent of social injustice both from the legacy of colonialism, apartheid and filthy corruption in government which doesn’t care enough to make sure that the infrastructure works for everyone (load-shedding being a new, very familiar word all over the country for people enduring enforced electricity blackouts, causing suffering and inconvenience for everyone, poor and rich).

Finally, this piece also represents risk and a request for care, because by making and writing about it in this way as an OER for an academic conference and linking to my doll collecting and craft hobby blog which I have operated anonymously for more than 10 years, I am taking a risk with my own academic reputation.