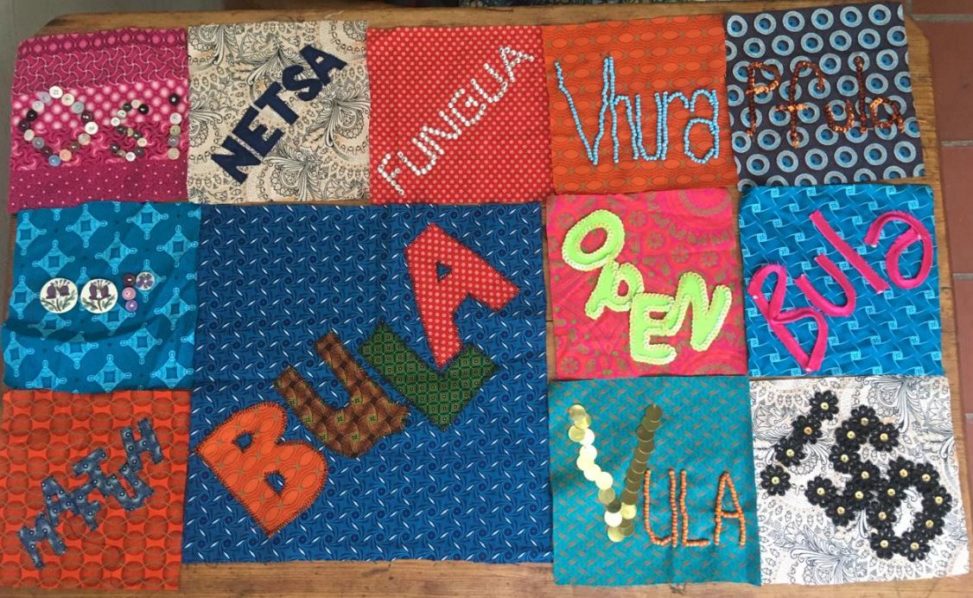 Stitching together Open in Africa

The squares in this piece of the #FemEdTech quilt are made by 11 people who are involved in open education (#opened) in the Centre for Innovation in Learning and Teaching (CILT)  at the University of Cape Town: Laura Czerniewicz, Andrew Deacon,  Mary-Ann Fife, Shanali Govender, Cheryl Hodgkinson-Williams, Tasneem Jaffer, Sam Lee Pan, Nosipho Mali, Tabisa Mayisela, Janet Small and Sukaina Walji. CILT has a long history working in open education and these 11 contributors represent only some of the CILT  individuals whose work touches #opened. CILT’s #opened work includes research (eg ROER4D, Cases in Open Learning (COOL)  and MOOC Takers in Africa ), research and development of open textbooks through DOT4D, long-standing participation in the opensource community through Apereo  and the UCT MOOCs Project the  resources of which are CC licensed.

The threads of connection and commitment to the quilt spread across CILT’s different organizational units and varied roles including academics, learning designers and developers.

Our thematic choice is to foreground multilingualism and African voices, through the representation of the word “open” in several African languages and using local shweshe cloth. This is both a political and personal stance. It is political to remind that participation in the open education community is still skewed towards a western and westernized dominance in the same way that knowledge representation in general is skewed in favour of Global North perspectives. (For more about this, see Laura’s  talk/slides on knowledge inequalities.)

It is also personal because each of the languages has some connection to us and our work.

The word “vula” means “open” in isiXhosa, isiZulu, isiSwati, ThshiVenda and Ndebele. Not only is isiXhosa one of the three languages of the Western Cape, the province where UCT is located, but Vula is the name of the widely used open source LMS utilised by most of UCT’s 28000 students and 4500 staff. “Oop” is “open” in Afrikaans, the third language of the Western Cape and one of South Africa’s 11 official languages. “Bula” is open in seSotho and seTswana, two languages spoken widely in the northern region of South Africa, and Lesotho.   “Pfula” is “open” in Tsonga, another one of those 11 languages. “Vhura” is “open” in Shona, one of Zimbabwe’s main languages and the first language of several CILT staff currently and in the past. “Osi” is Yoruba, one of several Nigerian languages spoken by members of the emergeAfrica network hosted at CILT and language of some of our postgraduate students. “Fungua” is one of the words to mean “open” in Swahili, a dominant language in East Africa, and also the language of  several CILT post-graduate students. “Muftah” is one of the words for “open” in Arabic, not only because North Africa is indeed part of Africa (hence emergeAfrica events also run in Arabic) but also because Cape Town has a significant Muslim community for whom Arabic is important. There are of course many more African languages (an estimated 1500+) – we chose those with which and with whom we had a connection, and also those which we could verify with people we know (shoutout to Mbulungeni Madiba, Kende Kefali, Maha Bali, Felix Olakulehin and all who discussed this with us on social media). This was also important because the subtleties of the language matter: for example, Kende pointed out that there are five words for “open” in Amharic (from Ethiopia) and settled on “netsa” with its multiple dimensions and connotations of a free mind.

Finally, we decided to showcase the vibrant and popular shweshwe cloth, widely worn nowadays in southern Africa by people of different backgrounds, and thus, perhaps also a symbol of inclusivity. The story of shweshwe has a long history starting in the 1600s changing substantially over time.

More about us and our quilt squares in our forthcoming video, made, with thanks, by Laura Skippers and Nawaal Deane.

Open education for us is material, lived and eternally optimistic. 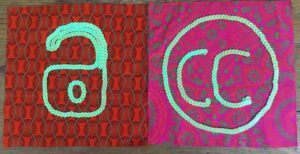