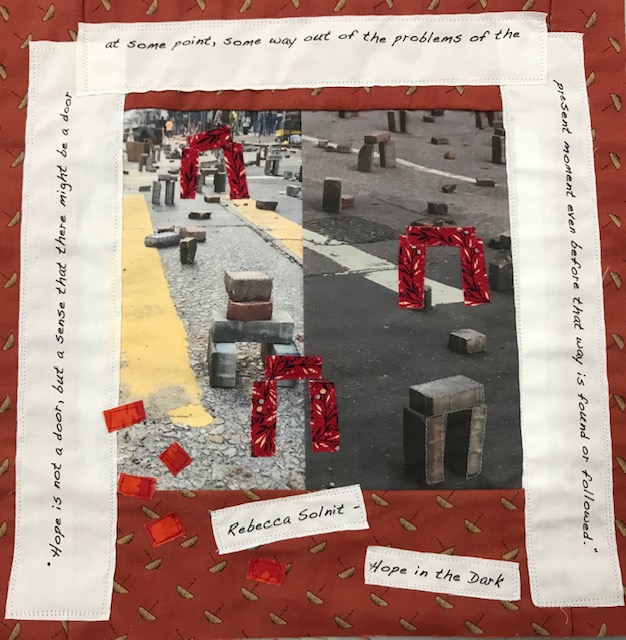 Hope is not a door

Hope is not a door, but a sense that there might be a door at some point, some way out of the problems of the present moment even before that way is found or followed. (Rebecca Solnit, Hope in the Dark)

‘Hope is not a Door’ emerges from a feminist friendship with deep roots. Rebecca Albury was the senior colleague who first showed me how activism and academic governance can fit together. Rebecca taught me to be more pragmatic and effective at both than I would have been otherwise. I shared an image of her beautiful quilt ‘Expanding Universe (detail)’ at OER19.

Rebecca and I both think about labour, not just as a political category or a cost. We think especially about women’s labour. Labour is the measure of mortality: whatever we do when we make things takes time from our remaining portion. The labour of making reminds us to be accountable to those whose lives will continue after we’ve gone.

That this quilt may outlive all of us who contributed to it is comforting, literally, and it helps us to remember that this is true of most of what we do in education: we write, we teach, we create, and we will leave behind the legacy of the things we chose to stand up for.

The trilithons and the umbrellas

In 2019, roads in Hong Kong were blocked with hundreds of small trilithons made from ripped up brick pavers.

Trilithons occur around the ancient world as doors, or as monuments whose meaning is now obscure. They might symbolise doorways to the world of the gods, or the gods themselves.

I heard two stories in Hong Kong: that they represent the human form of the protestor, and that they’re a vehicle barrier designed to collapse in a particularly obstructive way (the lintel falls and buttresses the uprights). Both make sense.

Whichever is true, the Hong Kong trilithons are made by hand, and they speak to the heat of the moment when they were thrown together.

Making this square began with the materialities of Hong Kong protest — the making and unmaking and remixing of the fabric of the street itself. Its future with FemEdTechQuilt is framed by Rebecca Solnit’s thoughts on hope that is not a door.

Sometimes we have to stand against things, while we are waiting for a sign that in the future there might be a door we can walk through. For this shared quilt, we want to leave the message that open practice can involve holding your ground in difficult times.

In this square, we combined two fabric printed photographs from the street with added floating, framing and stitched trilithons. The fabric that was given to this project by my daughter Clem included a brick-coloured piece with tiny umbrellas, which is an apt frame.

Rebecca is the real quilter. We collaborated on the idea and the design and the content, but the measuring and stitching and quilt-thinking are all hers. It was a privilege to be part of her work for this moment, and I told her how excited I was that we had made this thing together. 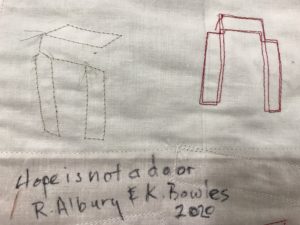 On the back of the square, our names.

“Well,” she said. “I would have used different colours. But there you go.”