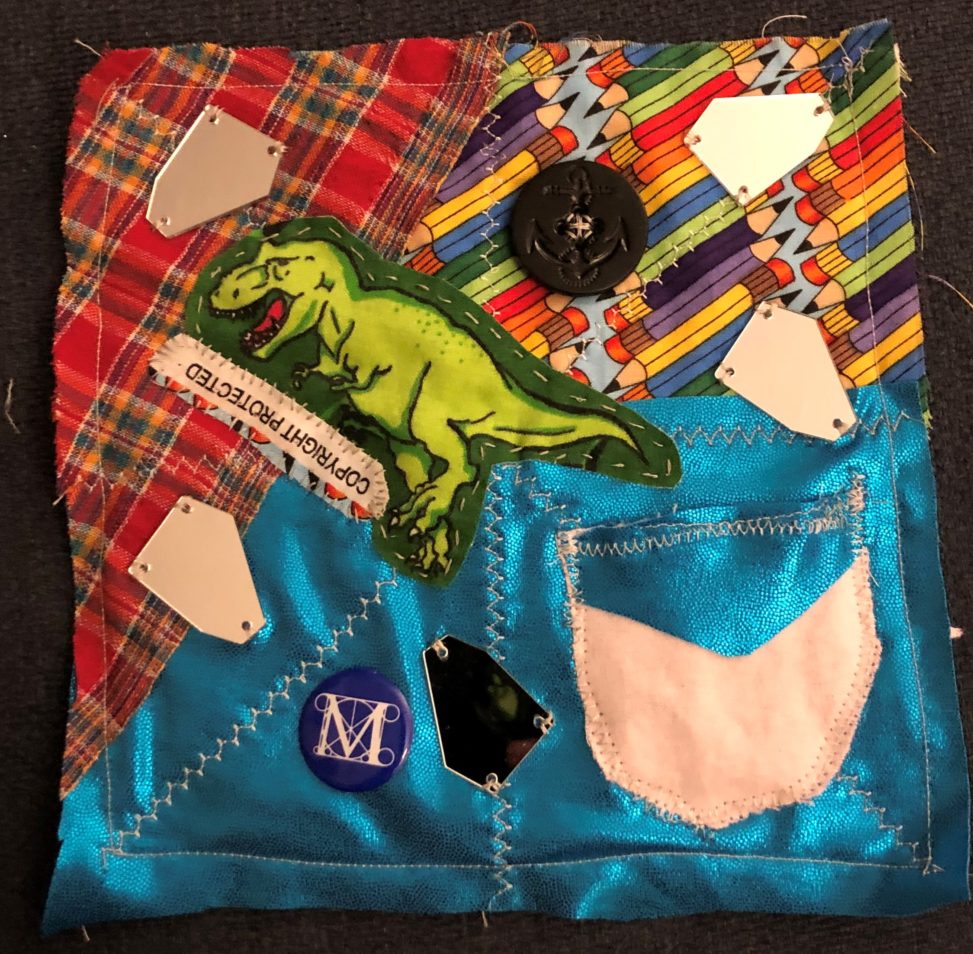 When I heard about this project, I was immediately inspired, and so excited to contribute, despite having never quilted before.  That’s me, and my square, in a nutshell- barging in to something I found interesting even though I’m not quite sure how to do it, very literal and full of random little bits, all very on brand for me.

As with most things, when I don’t know how to do them, I asked my good friend google, who offered me enough quilting knowledge to get going.  I went through my (sizeable, relative to the size of our apartment) long-neglected fabric stash looking for inspiration, which I found in spades, plus a good batch to offer up to the quilt backing.  Every piece of fabric here was used in a prior project, most of which were gifts for my family. Some of them were dismal failures, but all were made with love, which I hope also transfers into this square.  The backing and pocket are pink flannel, leftover from the blanket I made my older daughter for her first big girl bed. You can read more about the red plaid fabric in this post.  My craftwork and open education work are similar in that sometimes the cool things I try work out really well, and sometimes they are total failures.  I think it’s important to be honest about the ugly bits, so I included the pencil print fabric, which was meant for a tie I was going to make my husband, but never got around to while he was still working as a teacher, and the blue lycra, which was from a miserable attempt at making my own swimwear.  It is infinitely better off as a quilt. 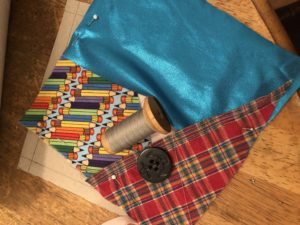 A long time ago, my father owned a clothing factory, in New York.  A big part of my childhood was living through the end of the changes globalization wrought on the garment industry in the US.  To memorialize my dad, and remember that globalization stitches* the world together for better and for worse,  the whole square is stitched with silk thread that’s (probably) older than I am (dig that wooden spool!).  I also added on a spare button from one of his old coats- now it has a much better permanent home than “bottom of the random button jar.” 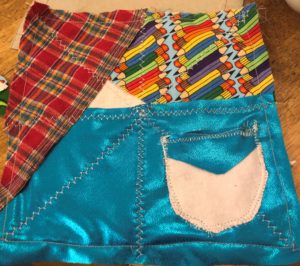 It’s a square now, but it’s definitely not done.

Stitched the background pieces up, and experimented with a little, well, machine quilting is definitely overstating it, but let’s say, decorative stitching across the whole thing.  This square contains both machine and hand stitching, because sometimes mixing and matching is the right approach for a given project- almost like using existing OERs and making tweaks and supplements, which is how I start designing most of my open courses.  I added a pocket, because I love Sharon Owen’s poem (which she even gave permission to reuse for nonprofit purposes, issuing a quasi CC-BY-NC) and was inspired by Pauline Ridley’s work in progress tweets.  Who knows what will go in that pocket?  It’s there, and it is ready to party. It is open.*

I had some very adorable help in the form of my second grade associate, who used my special fabric scissors to cut out the pocket.  Those things are extremely sharp, and just like my experiments with open pedagogy in my classroom, I was really nervous that something would go terribly wrong.  But she, and my students, will never learn to do things on their own if I don’t let go a little, and in the end, she, and they, do beautifully. 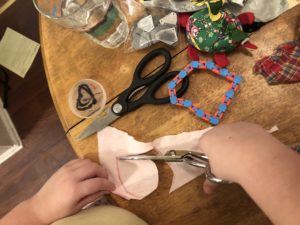 In crafting, I tend to the-more-is-more aesthetic, so I added several more random bits.   Also spared from eternity in the random button jar is a metal admissions tag from one of my very favorite places, The Metropolitan Museum of Art.  l’ve saved this tag for years, as the Met has stopped using them (they use stickers now), but I wanted to include it here, for preservation, because the Open GLAM folks have the best acronym ever, and because the Met itself has been moving towards making more of its collection available as CCO.

The selvage of the pencil print fabric actually had “Copyright Protected” printed on it, and it just felt right to stitch it to a dinosaur, who was cut from dinosaur-printed fabric I originally used to make a skirt for my sister, since her boyfriend was then making a lot of videos with a dinosaur puppet.  I thought it rather appropriate here as a stand in for our broken publishing ecosystem.  Unsustainably high textbook costs, paywalls blocking publicly-funded research, the idea that only an elite few have/have access to/can create knowledge are all approaches that need to go the way of the dinosaur, to make way for other ways of making and sharing knowledge. 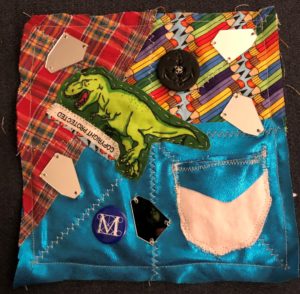 One thing I’ve been most drawn to in Open Education is the importance of participation and representation.  Which students get to see themselves in the work that they are assigned to read for class? Who is actually getting to speak about Open Education- whose voices (from what countries/classes/languages/genders/races) are heard most, and whose are missing?  The ability for students to be knowledge creators, for faculty to create or remix learning materials that will reflect their actual students, and the chance to correct the ommissions of historically marginalized groups, are some of the best parts of Open to me.  I really wanted my square to incorporate that, so I added small mirrors. Now everyone can see themselves* in Open.

I’m so grateful that this square, and all of its constituent parts, will go on to be a part of something bigger.  My thanks again to the wonderful folks behind #FemEdTech and this quilt project. I can’t wait to see it all together online soon, and in person hopefully one day.

*I told you, super literal.  Feel free to groan.